This amazingly tasty and satisfying Chickpea Tikka Masala is made with just 5 ingredients and so super easy to make. Entirely vegan and gluten free this is a keeper you won’t forget. 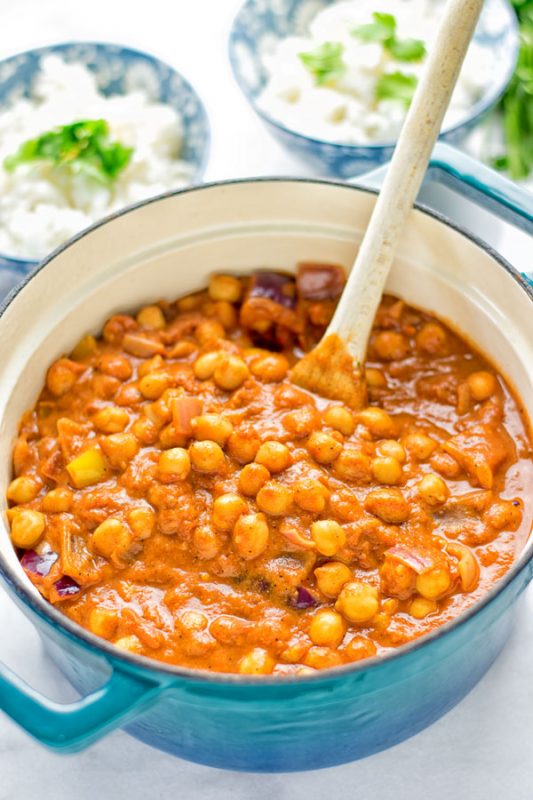 I’m all about easy, tasty, and insanely good food like this Cashew Curry Broccoli Stir Fry.

This Chickpea Tikka Masala is no exception and will not disappoint you. It’s warming, creamy, perfectly seasoned with incredible flavors, addictive, unbelievable easy, protein rich, and seriously so so good.

The preparation couldn’t be any easier. In just a few steps you are done with my recipe.

Before we’re going into the loop, let’s talk about some food facts. 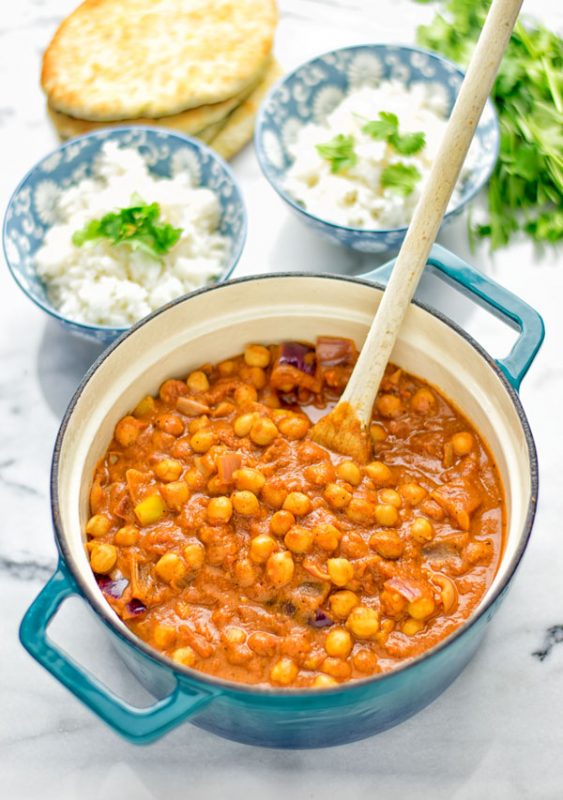 What is Tikka Masala?

A tikka masala recipe is often well known as chicken tikka masala. It’s made obviously with chicken, butter, heavy cream, a lot of spices, and garlic. So it obviously isn’t plant based or diary free.

There are different versions of the dish that differ by which spices are used.

I keep it really simple and use only garam masala, which is a spice mix from cardamon, ground cloves, cumin, cinnamon, coriander, and pepper.

You will find some versions with chili which are a bit spicy than others. 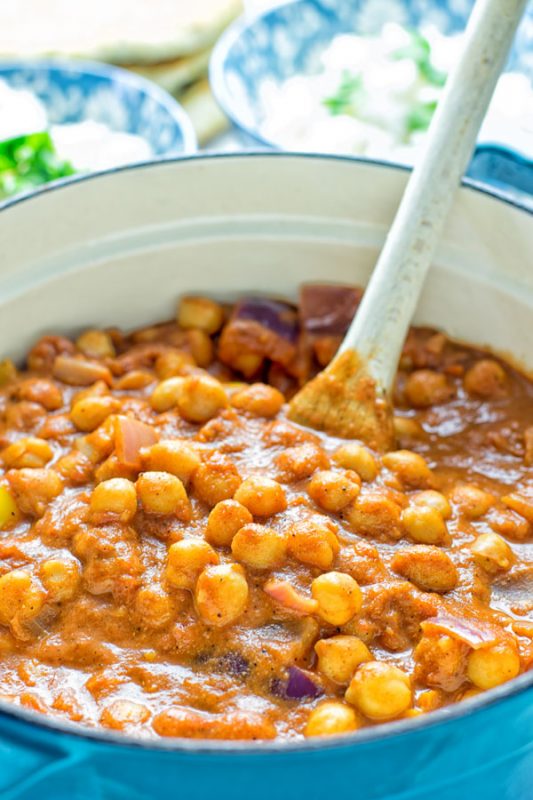 I was lazy and bought a store version from a local organic store. So this is all natural and made without any preservatives.

But if you want try something new, you can sure make your own. 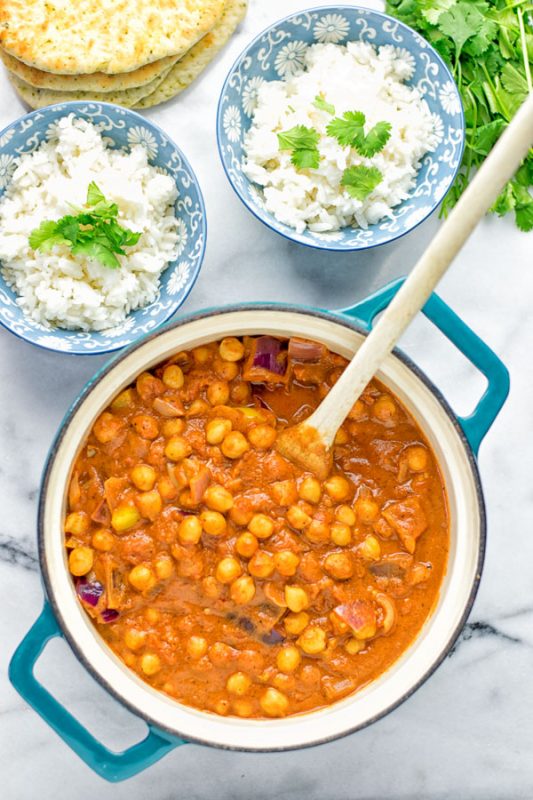 How to make Garam Masala?

As I mentioned before you can use ground cloves, cinnamon, cardamon, cumin.

The best way I think is to use whole seeds. Roast them a bit before in a casserole to enhance the flavor even more.

Next grind them in the grinder attachment of your food processor or use a mortar. Grind until you reach the texture of fine flour.  Store it in airtight jar and enjoy. 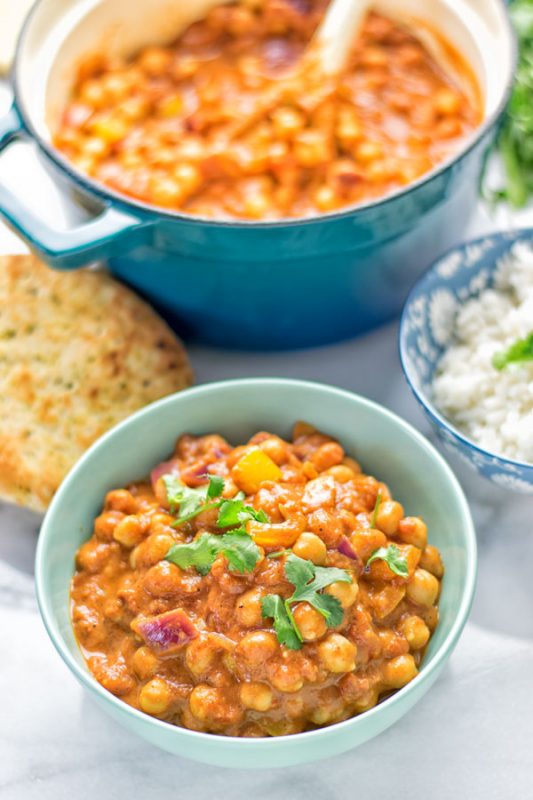 How to make Chickpea Tikka Masala

Let’s getting straight ahead. It’s so easy. All you need for this vegetable masala is one pot, shall we?

Combine all ingredients like the chickpeas, chopped tomatoes, coconut milk, garlic, garam masala in that pot. Season with salt and pepper, bring to cook, and simmer for 10 minutes.

Divide onto plates or eat straight from the pot. 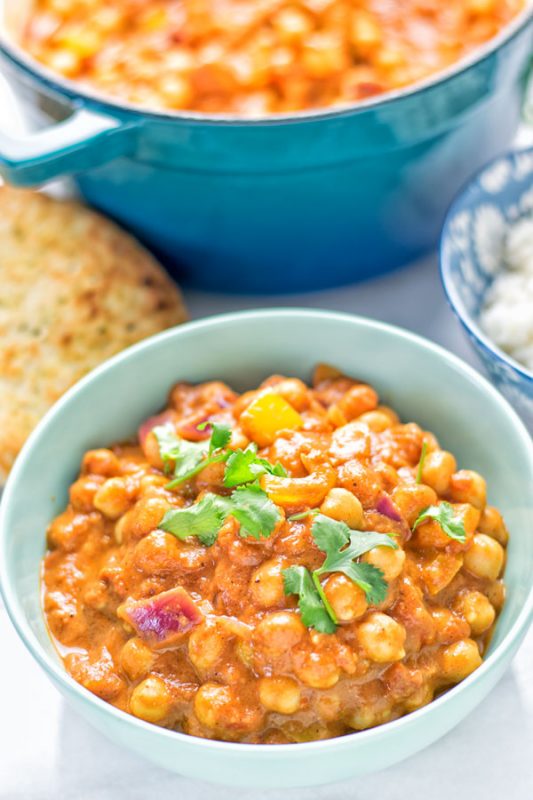 If you use the optional add ons like onions and bell peppers, it will take 5 minutes longer. First heat a bit coconut oil or use vegetable broth for oil free cooking. Fry the veggies for about 5 minutes.

It tastes delicious on it’s own, but will also be delicious to serve with some basmati or any kind of rice you like. I suggest also you try it with some naan bread.

If you give this a try, I’m pretty sure you will love this Chickpea Tikka Masala as I do. Snap a picture, show me your remakes on Instagram or Facebook with a tag.

Hi. I’m gonna try this recipe today. I was just wondering when you let it simmer for 10 minutes should it be covered or uncovered? Thanks and can’t wait

Hi Stephanie! Covered on medium heat, but open the lid and stir from time to time. Hope that helps.

Wondering if this could be made in the slow cooker

Hi Janel! I haven't tried that, but I think it will work. Let me know what you think. I can't wait to hear about your result and experience.

Absolutely scrumptious and deserves more than ***** because it is made with pantry staples! (I can't rate this because no stars show up in my comment section, sorry.) I serve this with jasmine rice on the side and my grandchildren absolutely love it. Thanks so much for posting this recipe.

I prepare this recipe once a week for the children in my daycare, they love it so much! They begged me to share recipe with their parents. I put a little ginger and carrots in mine.

Thanks for your great feedback, Lisa! Happy to hear it is such a big hit with the kids. Would you mind leaving a star rating with your review? Your experience is so helpful for other readers. Thanks so much.

Hello! I used full fat coconut milk but fresh tomatoes (chopped just not from a can) and it’s been cooking for 20 minutes but it’s so watery it looks like a soup :( any tips?

Hi Diana! Use some tomato paste. Hope that helps.

Enjoy delicious vegan food for everyone. All my recipes need only few ingredients and easy steps to make them. They are budget friendly and perfect for meal prep.