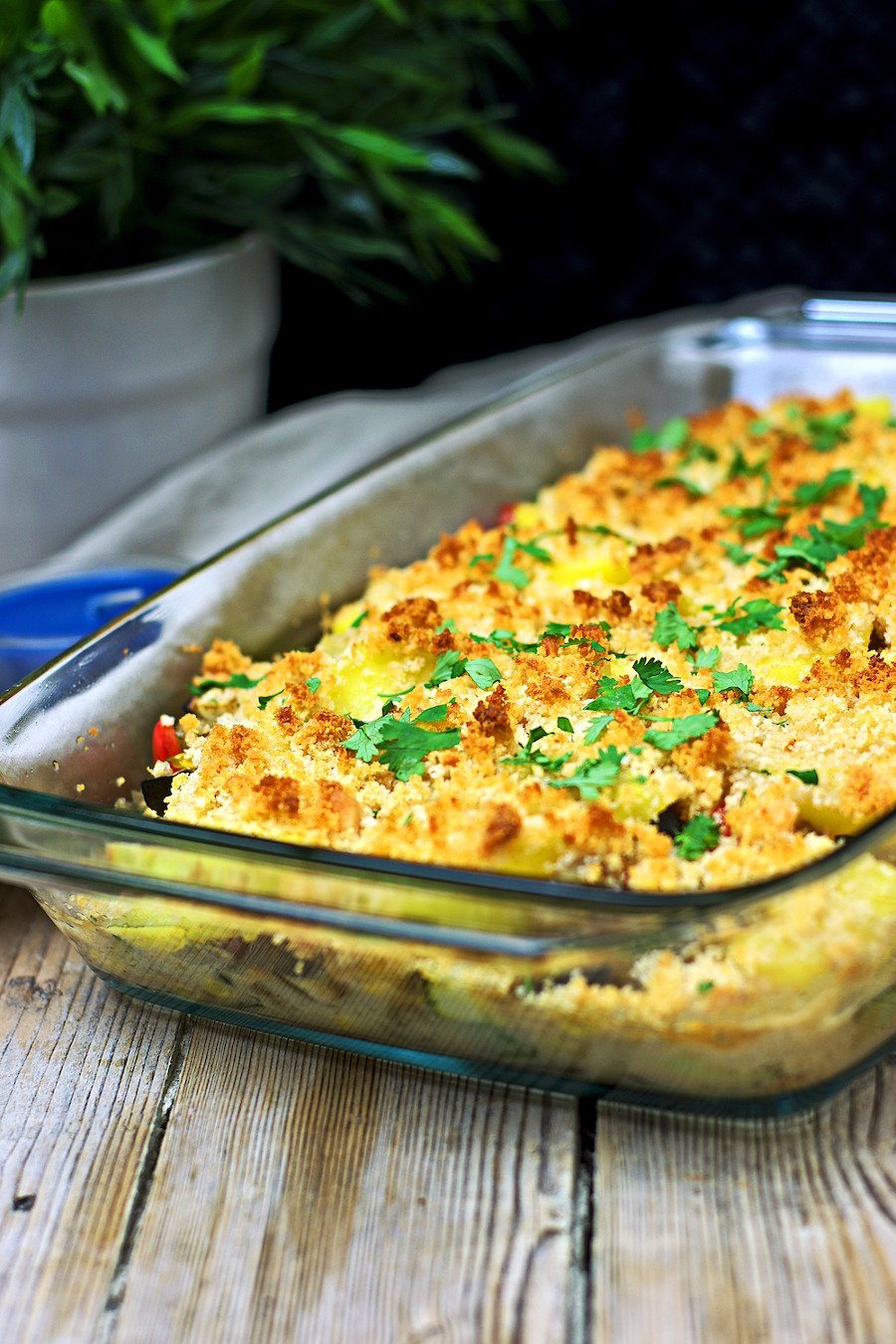 What makes a good meal? Or a better question might be, what is a good meal for a family dinner?

You know dinners of the type you will have on a holiday. Sure you want to have some festive touch to it most of the times but is that really what counts?

When I was kid, I often observed my parents or grandparents getting awfully stressed out over holiday food. The impression I got was that unless it took half the day to prepare, the dinner was not adequate for the occasion. Case in point: Christmas dinners.

Now, really? Is it necessary to spend hours in the kitchen to prepare a meal that is being devoured within minutes?

Don’t get me wrong, I love cooking and good food. But I don’t see why it can’t be good and take much less effort at the same time. 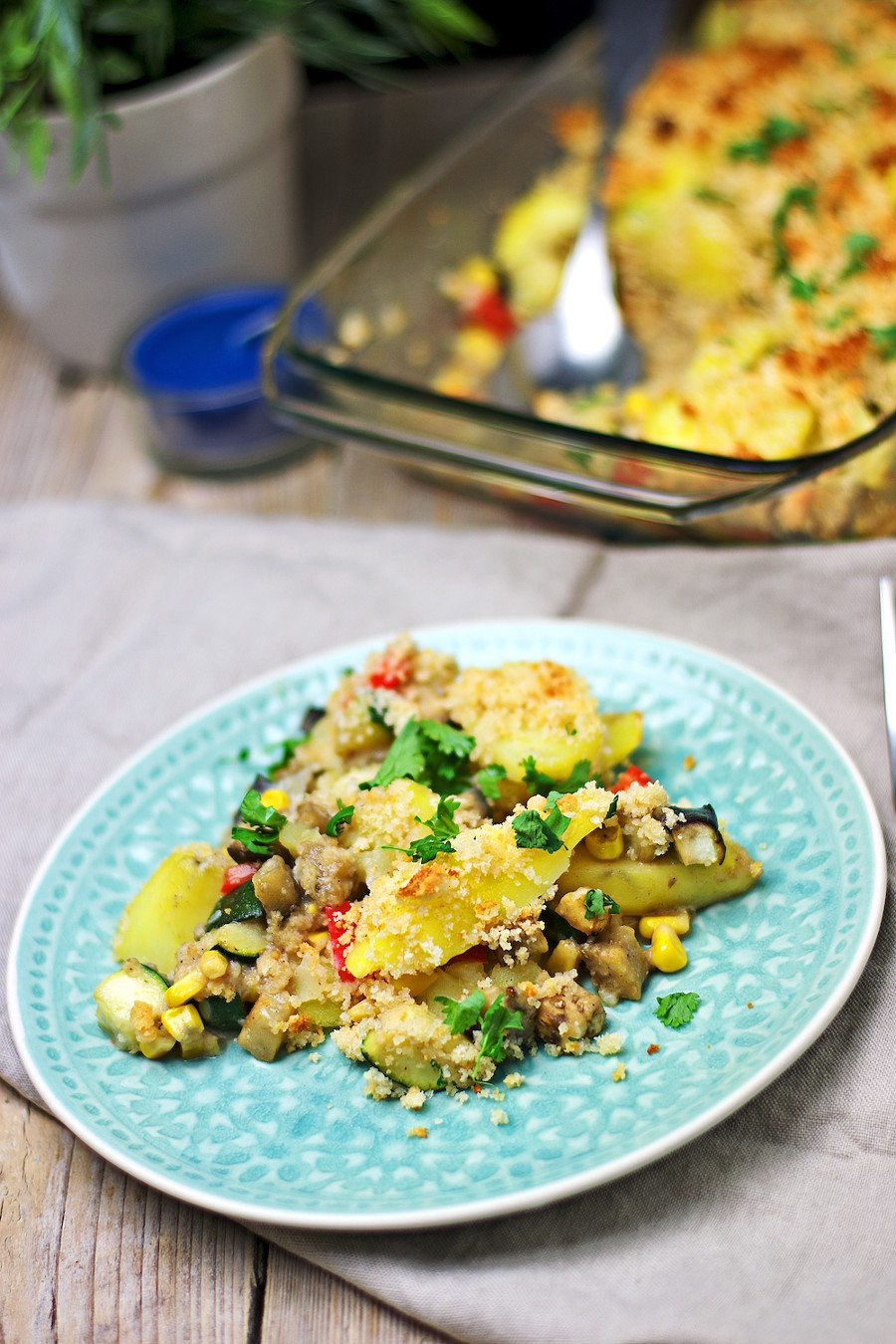 One of the types of dishes that always worked well were casseroles. You can prepare them in advance and done right are incredibly delicious and fit to the occasion.

Potato casseroles seem to be favorites and anticipating that some event will come up sooner rather than later, I began thinking about making an awesome Vegan Potato Casserole.

In some ways, I have been trying to ‘veganize’ several classical dishes, like my Vegan Shepherd’s Pie, Vegan Hoppin’ John, or Vegan Blueberry Cobbler. (If you haven’t checked those out, now is the time!)

And for this casserole, two things needed to be taken care of: first the sauce, second the crust.

I’ve recently experimented with making a Vegan Cheese Sauce recipe and considered simply using this. But that seemed a bit too… well, cheesy. It’s better suited to making Mac’n’Cheese I think.

So I created a new easy sauce based on coconut milk, tahini, and potato starch instead of the more traditional flour. A bit of organic vegetable broth gives the sauce the desired consistency. 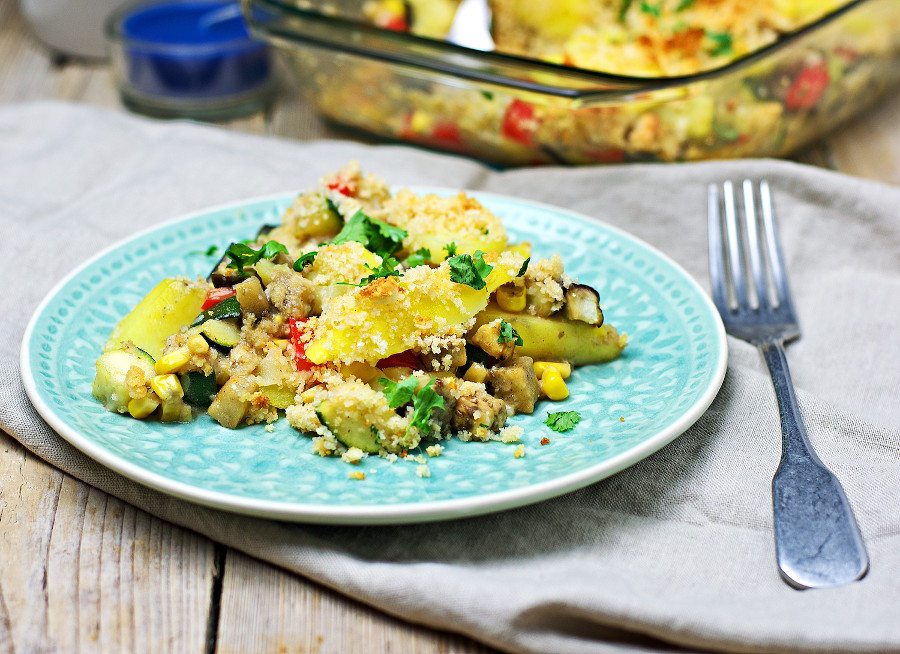 But now for the crust. Something that would be a good substitute for the traditional baked cheese. Sure I could just have grabbed some of the vegan cheeses. But I wanted something more inspiring.

Something with a little crunch and punch. And because I am a nut lover, why not mix some nuts in there?

Which nut should I choose? I was lucky to stumble across this article by Food Matters about “10 Fascinating Health Benefits of Macadamias“, some of my most favorite nuts.

Good for your heart, reducing the risks of cancer, strengthening of bones and much more – that’s a deal.

I combined Macadamia nuts and gluten free breadcrumbs in a blender and processed them until I got a sort of crumble. That would become the crust of my Vegan Potato Casserole. 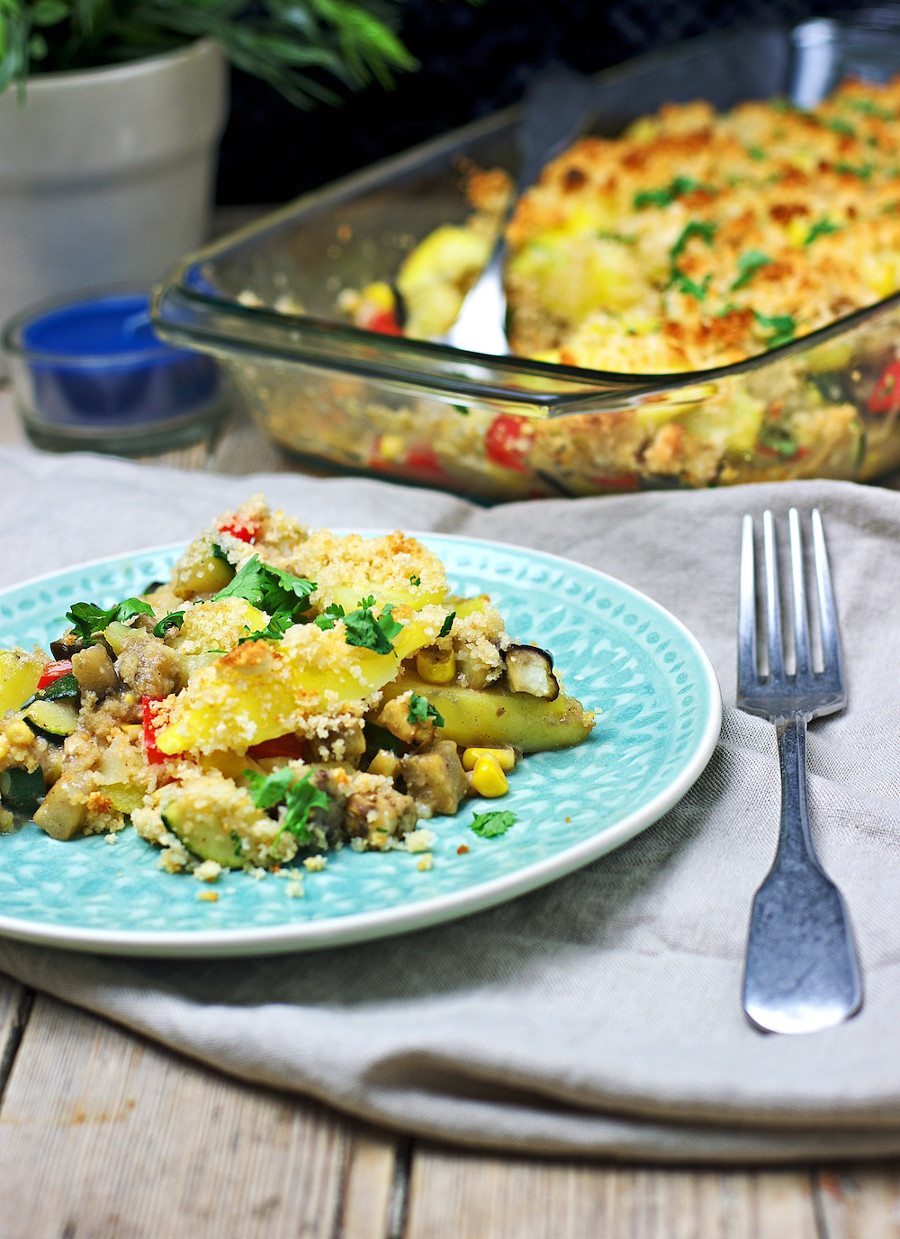 How to Make a Vegan Potato Casserole

When I made this casserole, I decided to pre-cook the potatoes and pre-roast the vegetables (bell pepper, zucchini, eggplant). I think that is not strictly necessary, if you don’t want to do that.

I’d then suggest to make the sauce a bit more liquid and double the baking time. But then you should better slice the potatoes very thin. I didn’t mind the extra steps because they are super easy.

I made layers of vegetables and potatoes, and after filling in the sauce topped it off with the Macadamia Crunch.

The Vegan Potato Casserole then bakes for about 20 minutes until the top gets golden-brown.

Then it’s high time to enjoy this meal.

It can go perfectly on it’s own or as a side dish. So easily done and almost no hassle. I’m all into this, are you too? 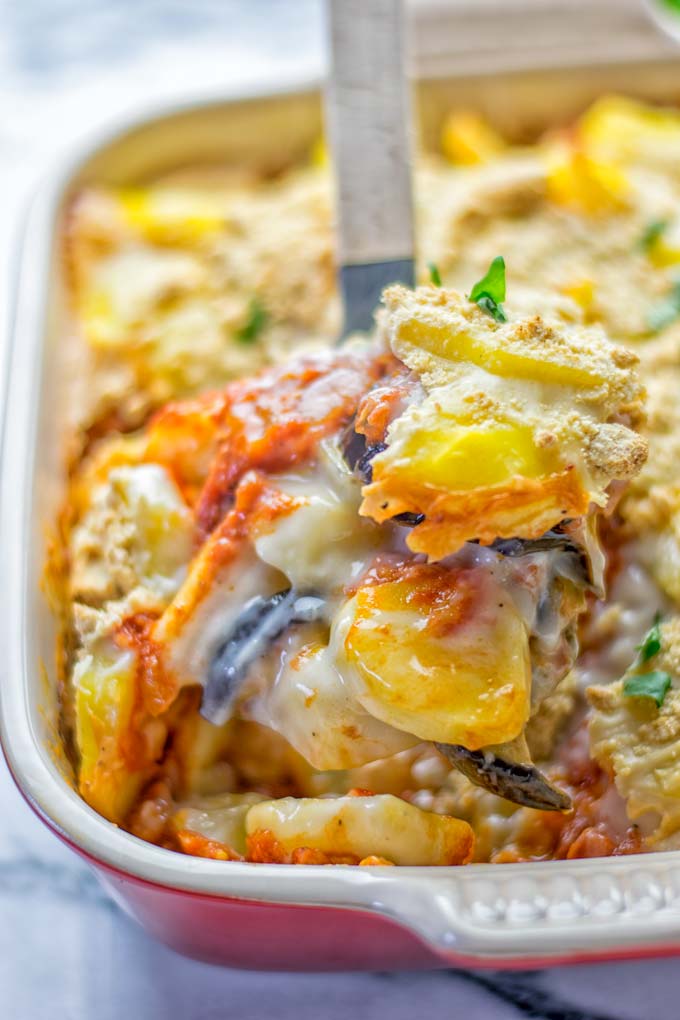 There are way more ways to give a vegan potato casserole even more exciting twists. Just check it out using the search bar.

I will give you many more easy and delicious ides there. How would you like an Eggplant Parmesan Potato Casserole like in the picture above?

Or maybe a bit more exotic? Then try the Moroccan Chickpea Lentil Potato Casserole you can see below. 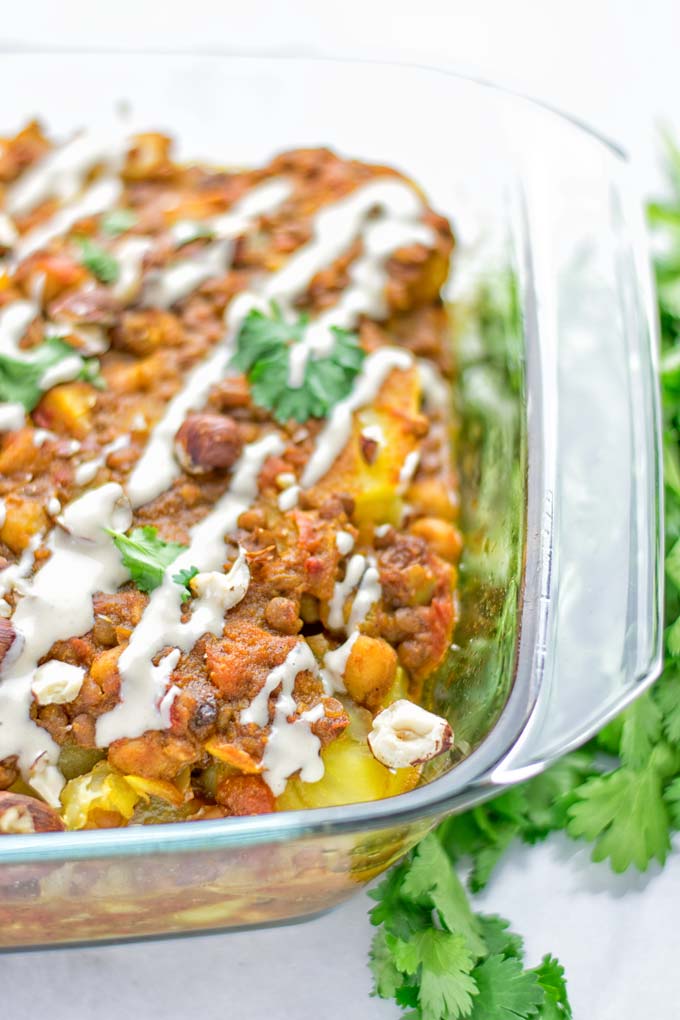 Love to hear from you!

For the Crunchy Macadamia Topping:

This looks so good, can’t wait to try it! Can you please suggest what I could use in place of the store-bought corn starch? My shopping options are limited in the remote area where I live. Thank you in advance!

Hi Laura! You could use a bit of flour until you reach the desired texture and consistency. Hope that helps.

I made a test run of this yesterday. I really liked it, but I found the sauce a little thin. Suggestion on how to make it a bit more robust? Should I have used condensed coconut milk?

Hi Tee! I would say use more starch and definitely use full fat coconut milk. Hope that helps.

Hello! Thank you for enthusiastically sharing your recipe. Can I prepare this the day before and bake it on serving day?

Hi Bernadette! I haven't tried that before, but I would say why not. Let me know how it goes.

Suggestions on replacing the eggplant and zucchini? Really don't like either of them. Thankd

Made a wonderful vegan dinner tonight! I used cashew milk instead of coconut because I was out of it, and I used pistachios in place of the macadamia nuts. Everyone loved it! Thank you!

Thanks so much for your fantastic feedback and sharing, Amy! That sounds delicious with cashew milk and pistachios, yum. I hope you'll find lots of more recipes to try.

Enjoy delicious vegan food for everyone. All my recipes need only few ingredients and easy steps to make them. They are budget friendly and perfect for meal prep.